Monument Valley 2 (released in 2017) is pricey for a mobile game, but it’s an essential sequel to Ustwo Game’s first masterful, intuitive 3d puzzle experience. It has slightly more of a mysterious narrative this time, as you guide your tiny figure(s) again through very complex-looking scenery (or deceptively simple) that shifts around in spiritual and unexpected ways. Never has getting from point A to point B felt so surprising and majestic. The detail and design that’s gone into the production is at times, awe-inspiring. It’s precisely this brand of game that gives you a reason to share pics via the in-game camera (to take screenshots) and generally just feel optimistic about the technological power inside a smartphone, which also elevates the whole touch-centric medium of mobile gaming. 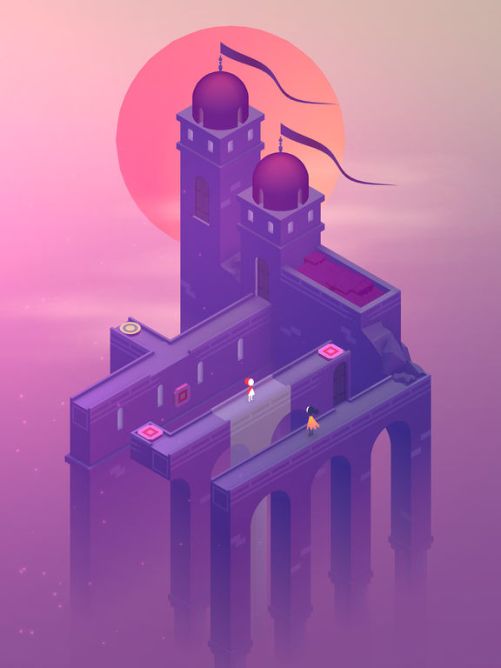 A good way to describe this game to people is to mention those ornate, or antique, oriental-style boxes that were designed to click or slide open, or activate in unusual ways, and hide secret compartments. Playing this game is to help its tiny characters lost in such machinations, and yet accompanied by dreamy, zen-elevated ambient music. Throw in a strong dose of M.C. Escher, the artist/wizard who once conceived of now-famous, mind-bending paintings and you have an endless playground and perspective on life. Surely the guy would have loved this game but must never have guessed how immersive his art would one day become.

[Another game ‘Hocus’ makes more of an honest, flagrant tribute to Escher – but that’s another story.]

So, how does Monument Valley 2 compare to the first one ?

This time around you start off as a mother called Ro, and you have a daughter who follows along. This creates mystery from the outset, with a wide colour pallette and well-spaced, straight-forward starter levels for anyone not used to the MV format.

The scenery is even more attractive than before, and you can tell the developers are going deeper into their own puzzle world; but also moving more ‘outside the box’ as it were. It’s a move that also makes it more accessible and kid-friendly.

In fact, it’s possible to sense some of the ghost of ‘Prince of Persia’ / Jordan Mechner-style design ingenuity return out of game history, with that difficult dungeon to survive. However, there are no time limit restrictions here, and it’s not as tricky.

Where the game really excels is in the level of surprise infused either in the puzzles, pathways or platforms themselves, or when a ‘game event’ occurs. An example of this is in ‘level’ 2, when a landslide sweeps down, destroying staircases and pathways in what was becoming a nice, easy-going progression. It separates you from your daughter character, and now you must find a more lengthy (and more Escher-style) way to get back to her. Life’s little surprises, eh? It’s a shame we don’t see more of these events as time goes on. 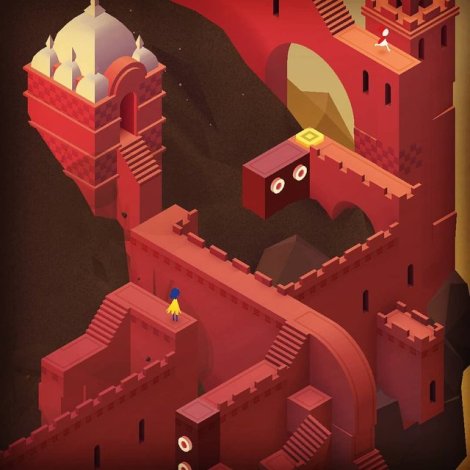 In most games, you can predict where you might end up in a level or situation. This is certainly not the case in MV2 when finding point B. The sense of exploring intuitively – and succeeding – is at times, profound. In terms of surprise, you could end up in any direction, upside down, or retracing your steps to find the exit door.

There are many messages throughout Monument Valley 2 including one about age and youth, parenthood itself (when to hold on and when to let go), but always the most powerful is this: that in doing and progressing intuitively, it’s always possible to work out the way through. I only really got completely stuck in one puzzle area, but then, just by playing – gaming – we can find the solution eventually. This is reassuring for players accustomed to getting stuck in a puzzle and then never bothering with the game again. There are challenging times here, but we can expect them not to be overwhelmingly so, which would kill the game, potentially. And it’s clear that Ustwo were aware of this, and have wanted the game to be a consistent journey, so they keep the surprise and variation level pretty high at every turn, without raising difficulty too far. No easy feat.

There are even times when you’ll be rotating your phone just to try and view the level problem another way (which might also be the perspective of the daughter character, who is upside down). Such ingenious touches must’ve have taken some time to get right.

As things progress, you become quite attached to your daughter, having been separated a few times. The levels use the concept of having to ‘take care’ of both characters, bring them together, before they ultimately must go their ways. However, this relationship could have been stretched much more, tested or made more emotional. Some of the areas feel more like ‘filler’ sections that look sweet, but don’t do very much. It might be the absence of bad guys this time, or the raggedy black crow-people that occupied or obstructed your intentions in the previous game.

Despite the diversity of colour and puzzle type, there is therefore a slight lack of cohesiveness that suggests the game could have pushed the limits further, as with the first one. Radically varying each zone doesn’t necessarily make a lot of sense.

A really nice touch is after completing a level you get to create a unique, trippy pattern memento – a spiritual mandala – which then becomes fixed (although animated) as it enters ‘posterity’. You can even take a photo of it to record your progression. This is a simple ‘treat’ but it does reward and heighten the completion mood plus the art and potential of game-playing, and is absent from many. Quite inspired, but again, it would’ve been nice to have seen this taken further, like into a scene where all previous mandalas intermingle and ascend into the sky or something.

If the developers continue to be as entranced (as us players) by the unique and complex ‘puzzle world’ they’ve now conjured, twice, successfully, then they should definitely re-visit or expand on this title, as there seemed to be many puzzles of possibility that Ro and/or daughter travel through, but never return to. Maybe things were scaled down due to budget restrictions or something which is a shame since Monument Valley 2 is not a world you’ll be in any hurry to complete, or to leave.

Despite a sudden ending, which leaves you feeling like some of the ideas were touched upon but not fully explored (including more ‘game events’ like level 2 would’ve been great) it’s still ok, for the standard for mobile games has once again been set. Let’s just hope it’s because there might be yet more mini-adventures to come…

Other games from Ustwo Games:

DIAMONDS IN THE ROUGH APP STORE

Obviously, there are many such shiny smartphone games hiding in the app store (a bit like a MV puzzle itself these days) but maybe this review will push you in the direction of this gem.

If you have kids, they should also be entranced by Monument Valley 2 for a while, in a more cerebral way over the usual zombie-blasting or generally more transient kind of game. Sometimes, if you do splash out the extra cash, you’ll give them something to remember, or come back to.

Both Monument Valleys take you on a beautiful journeys of possibility, and if nothing else beyond some mental exercise, they teach the player that there is always a path through the hardest-seeming situation, simply by tinkering, simply by exploring. 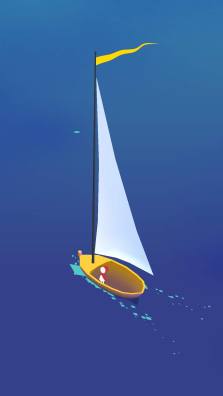