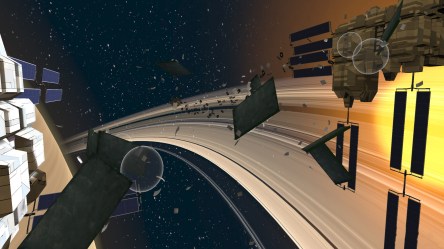 Simulating survival in space is a great way to get folks thinking fast on their feet and interacting with scientific objects and resources. Wearing a VR headset feels a bit like a space-suit after all. In Desirium: The Dark Side of the Moon it’s akin to being underwater, where vast abandoned shapes loom out of the blackness of space. However, your oxygen supply is depleting, so you’ve almost no time to take it all in, so should you go back to the rover, or see if there’s a spare tank a bit further on? These kind of choices, familiar to players of No Man’s Sky (VR version coming soon) force explorers to rapidly get to grips with the controls – including the nicer ones like the cool sensation of space jumping.

Welcome to the world of VR apps and games in space, from horror and spooky narrative to educational, scientific simulation of the ISS.

Check out the full list of some of my top VR space apps, games or experiences available in the Oculus Store. You can see trailers there for all of the experiences. The article was submitted to Gaming Impact.com, where I often contribute.


OFFERS !
I mine Bitcoin here
and now using Betterhash
Get your Unstoppable Name
My Electroneum code: 5B872D
Get trading signals
My Coinbase offer
My KuCoin offer
My Bitpanda offer
My TransferWise offer
My NASH dex offer
Get $100 PROpy tokens