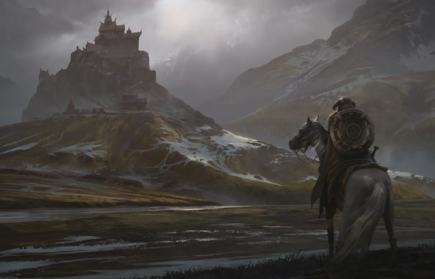 Skyrim was just a game… or was it? Its legacy lives on, and stirs longings for real and fantastical worlds either far away or once explored. Never before had a game been so deep and extensive for single-player, role-playing adventurers.

Are they replacements for reality, or more like powerful reflections, that help us down the line, in confronting real situations? Open-world games really have to be both. They have their own stories that can be real, satirical, mythological or very fantastical. They can present extraordinary realities with elements long-past – or possibly still to come.

And they are far more involving than a movie. Customising a character, managing resources and equipment, decision-making, exploration and applying the right skills to situations in order to survive. They also frustrate, forcing us to backtrack or replay and take a different path.

I’ve also discovered a whole load of Youtube vids just featuring the game music showing live areas from the game. These are great for leaving on in the background / late night working.

Read more about The Elder Scrolls V: Skyrim on Everipedia:

The game’s main story revolves around the player character’s quest to defeat Alduin the World-Eater, a dragon who is prophesied to destroy the world. The game is set 200 years after the events of Oblivion and takes place in Skyrim, the northernmost province of Tamriel. Over the course of the game, the player completes quests and develops the character by improving skills. The game continues the open-world tradition of its predecessors by allowing the player to travel anywhere in the game world at any time, and to ignore or postpone the main storyline indefinitely.

Watch the opening scene and Maluka‘s covers of in-game songs:

From the full Everness Skyrim playlist
(ideal for background TV or late-night working.)

Map of the world: 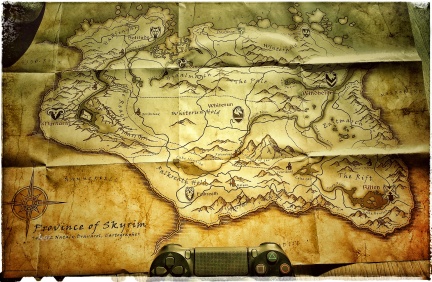 Will Virtual Reality, Augmented and Mixed Reality bring players even closer – too close – to such ‘super’-worlds? It seems we have a big need of an enriching, artificial barrier for play and exploration, between us and the real world. There are already multiple, cultural layers to our realities. But will they also swallow up – or even alter – our senses, and produce a disconnect?

Staying within the lines is key, where the positive aspects are many: RPG character customisation, decision-making and resource management, in getting prepared to confront situations… and gain great memories and references.

Have you checked out Ade’s Press Offer Page for earning you passive crypto?